This guide covers how the page life cycle works in an app built with Ionic and Angular. 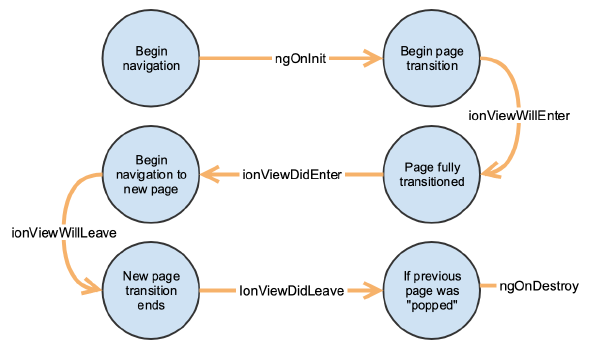 Ionic embraces the life cycle events provided by Angular. The two Angular events you will find using the most are:

Components that use ion-nav or ion-router-outlet should not use the OnPush change detection strategy. Doing so will prevent lifecycle hooks such as ngOnInit from firing. Additionally, asynchronous state changes may not render properly.

In addition to the Angular life cycle events, Ionic Angular provides a few additional events that you can use:

The difference between ionViewWillEnter and ionViewDidEnter is when they fire. The former fires right after ngOnInit but before the page transition begins, and the latter directly after the transition ends.

How Ionic Handles the Life of a Page​

Ionic has its router outlet, called <ion-router-outlet />. This outlet extends Angular's <router-outlet /> with some additional functionality to enable better experiences for mobile devices.

When an app is wrapped in <ion-router-outlet />, Ionic treats navigation a bit differently. When you navigate to a new page, Ionic will keep the old page in the existing DOM, but hide it from your view and transition the new page. The reason we do this is two-fold:

Pages are only removed from the DOM when they are "popped", for instance, by pressing the back button in the UI or the browsers back button.

Because of this special handling, the ngOnInit and ngOnDestroy methods might not fire when you would usually think they should.

ngOnInit will only fire each time the page is freshly created, but not when navigated back to the page. For instance, navigating between each page in a tabs interface will only call each page's ngOnInit method once, but not on subsequent visits. ngOnDestroy will only fire when a page "popped".

In Ionic 3, there were a couple of additional life cycle methods that were useful to control when a page could be entered (ionViewCanEnter) and left (ionViewCanLeave). These could be used to protect pages from unauthorized users and to keep a user on a page when you don't want them to leave (like during a form fill).

These methods were removed in Ionic 4 in favor of using Angular's Route Guards.

A route guard helps determine if a particular action can be taken against a route. They are classes that implement a certain interface. The CanActivate and CanDeactivate interfaces can be used to implement the same type of logic that the removed events ionViewCanEnter and ionViewCanLeave did.

To use this guard, add it to the appropriate param in the route definition:

For more info on how to use route guards, go to Angular's router documentation.

Guidance for Each Life Cycle Method​

Below are some tips on use cases for each of the life cycle events.